This Summer’s Garden Blockbuster: Attack of the Squash Vine Borer

Find this article at:
go.ncsu.edu/readext?473919
— Written By Sarah Watts and last updated by Cameron Lowe

Summer is the time of year for Hollywood movie blockbusters involving monsters like the Hulk, Godzilla, and Aliens to come to the big screen. Monsters that crush buildings and flatten cities, leaving death and destruction in their wake. Who knew that a moth could be just as destructive in our own little backyard garden world. Unfortunately, many of you may have already encountered this “backyard garden monster”, who flattened your squash plants and crushed your long awaited dreams of summer squash casserole in the span of only one day. This “backyard garden monster” is, in reality, a moth called the Squash Vine Borer, and as most movie heroes say “Have no fear!”, there are ways of preventing their destruction.

The squash vine borer (Melittia cucurbitae) is a moth in the clearwing borer family who is a moderately sized, day-flying moth, and whose larvae spends part of their development as plant borers. Like most villains, the adults wear a disguise and mimic wasps or bees, slipping into your garden unnoticed. You have probably seen the adults in your yard before and just assumed it was a bee there to pollinate your vegetable flowers. Little did you know that it had a more nefarious plan in mind. Adults exhibit dark metallic wings, black and orange body coloration, and if looked at closely have feathery hairs on their body and legs typical of moths. In April and May, adults lay eggs at the base of the host plant or under leaves near the soil level. Once the eggs hatch, the larvae tunnel into the plant. Like their namesake, their favorite host plants are varieties of squash, but they can also affect pumpkins, gourds, and in rare cases cucumbers and melons. The tunneling, feeding, and growth of the larvae inside the stem disrupts the flow of water and nutrients inside the plant. Thus your squash plant appears to suddenly wilt out of nowhere, when the real problem has been growing inside the stem for 4 to 5 weeks. Once the larvae have fully grown, they exit the stem, and burrow into the soil. There they will overwinter as a pupa, preparing to emerge as adults the following year, and biding their time until they can wreak havoc once more.

So if you are currently standing over a wilted and flattened squash plant, you may think all hope is lost, and unfortunately, at this stage, there is little that can be done. However, all great movie heroes, even though they are knocked down, prevail in the end. So here are a few tips and things to look for to prevent an infestation next year.

This year, first thing is to make sure that you remove all wilted and infested plants out of your garden quickly, taking the larvae with it, and destroying the affected plant material. Do not use these plants in your compost piles as overwintering pupa are easily transferred back into the garden. Next, thoroughly examine the base of your other squash plants, looking for the telltale signs of squash vine borer larvae. Look for holes at the base of the plant expelling green or tan sawdust like material. This material is called frass and is the larvae’s excrement. If the plant is still healthy and unwilted, you can physically remove the growing larvae from the plant by slitting the stem lengthwise and destroying the borer. Then bury and cover the damaged portion of the stem with soil. Keeping the soil moist will help to stimulate the growth of new roots which can bypass the damaged portion and continue to feed the plant. However, depending on the damage already done by the borer, the squash plant may still wilt despite your best efforts. At the end of the season, make sure all squash plant material is removed from the garden.

Next year to prepare for the possible “invasion” of the squash vine borer adults, simply be proactive. Prior to planting, till your garden plot really well to help destroy any pupa that may have remained in the soil. If you are planting an early garden, you can utilize what is known as a “Trap Crop”. A trap crop is the early planting of a desirable plant such as Hubbard or summer squash in an effort to entice the adults to lay eggs on it. Once the egg laying time frame has passed, the trap crop can be removed from your garden and destroyed taking the borers with it. Another planting of squash can then be made in late May. If you are unable to plant an early garden, row covers can be utilized during the time frame when adults are most active. Row covers are a physical barrier that prevents adults from reaching the plants to lay eggs. Like trap crops, row covers can be removed in late May once the “danger” has passed. The use of insecticides is also an option, but timing is critical with this method. The insecticide must be applied prior to the eggs hatching, and if applied after the borer is already inside the plant is rendered ineffective. In selecting an insecticide look for organic pesticides containing the active ingredients neem, spinosad, or pyrethrin and synthetic pesticides containing the active ingredients permethrin, bifenthrin, or carbaryl (also known as Sevin). Be sure to apply the insecticide directly to the base of the plant as foliar applications are ineffective.

Unfortunately, there is no squash vine borer “Kryptonite”, but by applying these control methods to your gardening routine this year and next, you can reduce your risk. So get out there and yell “Action!” on your own backyard monster movie, and defend your garden!

More information on squash vine borers can be found at: 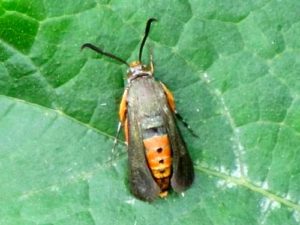 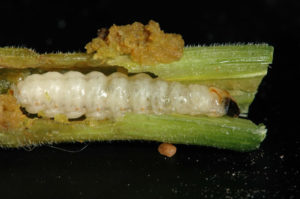 Squash Vine Borer (Larvae): Photo of a squash vine borer in the larval stage. Photo by Jeff Hahn of University of Minnesota Extension.

We also have a few other email lists you can subscribe to.