Find this article at:
go.ncsu.edu/readext?523191
— Written By Jody Carpenter and last updated by Sherry Lynn 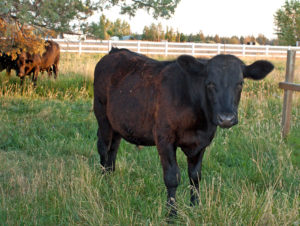 As the weather starts to break and the hot and humid conditions of Northeast North Carolina come creeping back, it is time for livestock producers and small herd owners to start thinking about parasite control. But what exactly is a parasite and how can I make certain that they stay away from my cattle or horses. Is it economical to invest in parasite control?

The definition of a parasite is any organism that obtains its nutrients via another (host) organism, often harming that host. Parasites can be internal or external, meaning they can live either inside or outside the animal. Some examples of common parasites are roundworms, tapeworms, mosquitos, mites, lice, protozoa, and ringworm. Ringworm is actually a misnomer, because it is not a worm at all but actually a fungal infection. Protozoa are single-celled microscopic organisms and come in a plethora of kinds. The most commonly known protozoa are Coccidia and Giardia.

It is not logical for a producer to think that he/she can be 100% parasite-free, because environmental conditions (i.e weather) are always changing and serve as the biggest factor in determining parasite load. Parasite load is the amount of detectable parasites in a herd/flock. The goal of every livestock producer should be to limit parasite load to a manageable amount to avoid production losses.

The cheapest and easiest way to accomplish this is sanitation. Feces and poor sanitation supply the parasites with a breeding ground that they use as a pathway to re-infect. By removing feces and debris parasites no longer have a breeding ground which limits the re-infection that can occur. There are various low cost, simple fixes to decrease parasite load on your farm. This article on decreasing parasites shares a number of these tips.

If a heavy parasite load is observed, then it may be necessary to administer an anthelmintic. An anthelmintic is a medicine given to eliminate parasites, commonly referred to as “dewormers”. When administering dewormers, always read the label and follow all directions as stated. Depending on the anthelmintic used, it may have a different route of injection. Injections can be subcutaneous (under the skin), intramuscular (in the muscle), oral or topical (pour-on); to name a few. It is recommended that you consult a licensed veterinarian with questions.

The use of dewormer cannot and should not replace good sanitation and environmental conditions. An existing parasite load can be drastically lowered if proper management is taken and animal health is given top priority.