Find this article at:
go.ncsu.edu/readext?588281
— Written By Adam Formella and last updated by Sherry Lynn

A new invasive pest, the crape myrtle bark scale, has been detected here in Currituck. The crape myrtle bark scale (CMBS) is a felt scale that covers its body with a white, fibrous sac where it lays eggs. The eggs hatch into crawlers which are pink, grey, or brown and move around the crape myrtle’s trunk. Female CMBS will then produce the white felt sac, while male CMBS develop wings and fly off searching for mates. Because the female CMBS do not have wings, the long-distance spread of this pest is due to human interaction. These insects are thought to have arrived in North Carolina from the movement of infested plants. 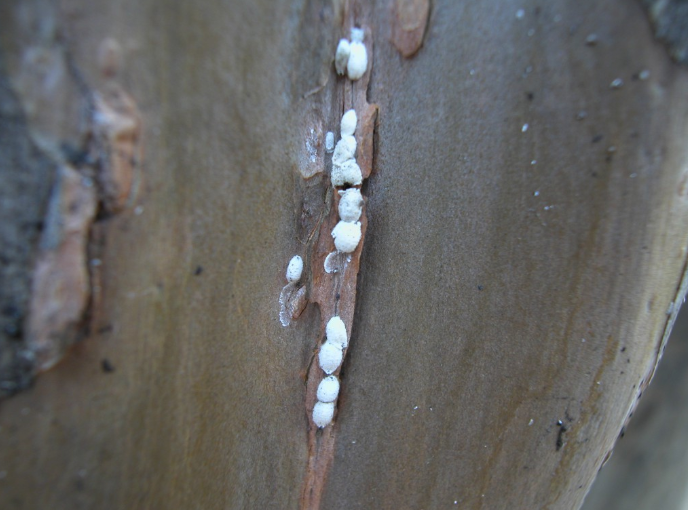 Picture provided by the University of Arkansas Cooperative Extension Service

Identification. Trees infested with CMBS are best identified by the white, soft female scales. When punctured, the white sac produces a pink gel-like liquid (image below). Another identification feature is the presence of black sooty mold. Crawlers (nymphs) secrete honeydew when feeding on crape myrtle trees. This sugar-rich secretion then turns black when molds start to grow. Look for patches of black mold on the tree’s trunk, limbs, and on the ground underneath. The presence of sooty mold is not always indicative of CMBS. Crape myrtle aphids also produce honeydew but are small, green insects found on the tree’s leaves. 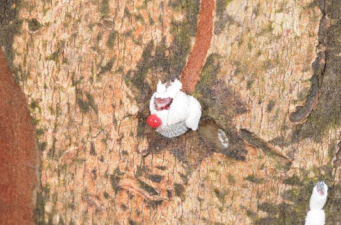 Injury. Scale insects feed on the sugars the plants produce. This feeding drains the plants of nutrients and leads to yellowed leaves, weakened stems and roots. Crape myrtle bark scale feeding is no exception. Feeding and sooty mold formation reduces blooms, photosynthesis, and aesthetic value of crape myrtle trees. Excessive honeydew production leads to trunks, limbs, and leaves becoming completely black. Eventually, these blackened trees will weaken and produce no blooms. Interestingly, this injury does not appear to be fatal to the trees.

Treatment. As is the case with most invasive species, there are few natural enemies of the crape myrtle bark scale. Lady beetles, including the multicolored Asian lady beetle and the twice-stabbed lady beetle feed on the scale. Unfortunately, they do not provide adequate control and populations of lady beetles are often too small and lag behind CMBS populations. Similarly, horticultural oil sprays are not effective against scales. The oils do not penetrate the soft scale coat, although they may kill crawlers (nymphs).

There are some insecticides that are effective in controlling CMBS populations. Insecticides are best applied in April for control of CMBS. For crape myrtle bark scale control, brush (using soft bristles) the trunks with a solution of a couple of teaspoons of dishwashing detergent per gallon of water to remove adult scales. Soil-applied systemic insecticides should then be applied as they are the most effective treatments currently available for CMBS and the easiest to apply. These insecticides contain active ingredients such as imidacloprid, imidacloprid + clothianidin, dinotefuran, and thiamethoxam. Listed below is a table from Mississippi State University Extension with a few of these chemicals. Remember to always read the label when applying insecticides. 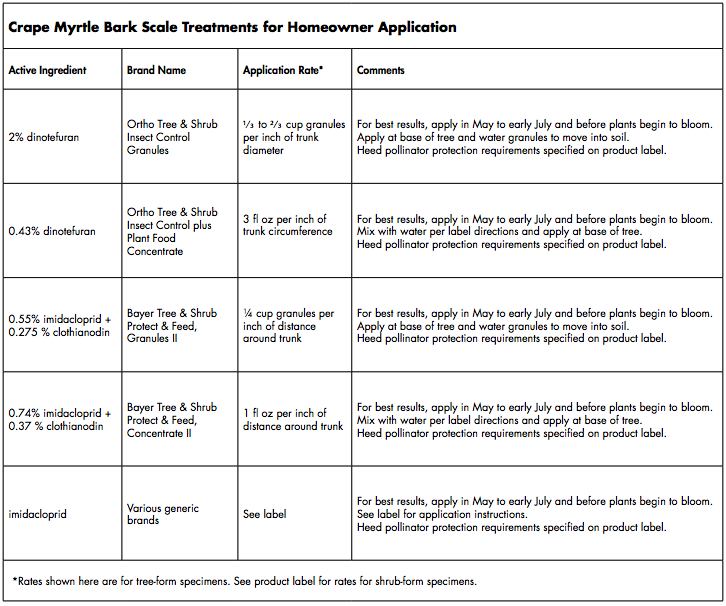 To report CMBS infested trees go to the Report Crapemyrtle Bark Scale page. If you have questions and would like help identifying or treating infested crape myrtle trees email or call Adam Formella at Adam_Formella@ncsu.edu or 252-232-2262.