Find this article at:
go.ncsu.edu/readext?605231
— Written By Adam Formella and last updated by Sherry Lynn

This time of year you can find these insects moving from wheat fields and woods’ edges to corn fields and gardens. Their feeding results in damage to the corn whorls, corn ears, and vegetables in the form of corky splotches. These insects are major agricultural pests at all life stages. Identification is easiest by color pattern at the different life stages, which often varies drastically from nymph to adult. Do you think you know what insect is being described and is depicted below? Test your expertise with this installment of “What the Heck is That?!?!”

This insect is identified by the color pattern at the various life stages. If the clues above lead you to guess the brown stink bug you are correct! The quiz image is of an immature (nymph) brown stink bug feeding on field corn here in Currituck. Once the bugs molt to become adults they turn the brown color where they get their name (right image below). Green stink bug nymphs, on the other hand, are green, orange, and black (left image below). Another way to tell these two stink bugs apart is their size. Brown stink bugs are about a quarter of an inch smaller than the green stink bugs. Both stink bugs feed on common garden vegetables and field crops, and are often found feeding together.

Brown stink bugs are polyphagous feeders, meaning they eat from multiple different food sources. These food sources range from grains (wheat and corn), to legumes (soybean and peanuts), to vegetables. Their damage varies from crop to crop, but is usually a form of depression or dimpling of the fruit, surrounded by discoloration. Stink bug damage is especially apparent in field corn where feeding on young plants results in twisted whorls, while later feeding results in small, banana shaped corn ears (image below). Feeding does not always result in yield loss, and scouting should always be done before spraying to determine if population levels reach thresholds. 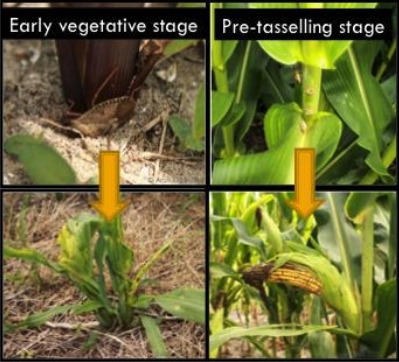 Brown stink bug management is easier for homeowners than farmers. Vegetable gardens should first be inspected for egg masses in areas where stink bugs have been a problem. Barrel-shaped eggs are found in June and July on the undersides of leaves. These eggs can be disposed of and will greatly reduce populations without the need for spraying. Once nymphs have hatched, damage will become visible on fruit and can increase rapidly. There are numerous chemical control options available to homeowners. If chemical control is unwanted, manual remove of these nymphs is possible but can be difficult to eliminate completely. If nymphs are found, they have likely hatched in the garden and you can expect around 20 – 30 nymphs per egg mass. Adults will also feed on vegetables, most common in early June and later summer months. Control of adults is similar to nymphs and is equally as difficult as they can fly.

More information on brown stink bugs and their control in corn, soybeans, or vegetables can be found at the links provided. If you have content (images, ideas, etc.) you would like to have featured in the upcoming installments of “What the Heck is That?!?!” email or call Adam Formella at adam_formella@ncsu.edu or 252-232-2262.

We also have a few other email lists you can subscribe to.